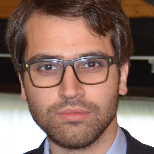 Helder Novais Bastos obtained a degree in Medicine in 2008, by Faculdade de Ciências Médicas da Universidade Nova de Lisboa (FCM-UNL), Portugal. He underwent undergraduate research in José Rueff’s lab, at Department of Genetics of FCM-UNL, from 2004 to 2008, where he carried-out an hospital-based case-control study to investigate the involvement of polymorphisms of several genes of the homologous recombination DNA repair pathway (XRCC3, XRCC2, NBS1 and RAD51) in thyroid cancer susceptibility. In 2009, he completed and passed the Post-graduate course in Travel Medicine (15 ECTS). The same year, he joined the School of Medicine and Life and Health Sciences Research Institute (ICVS) at University of Minho as an invited assistant and reseracher, respectively, having collaborated with several curricular units and activities of pregraduate and postgraduate curricular program. At ICVS, he was studying the cellular and molecular mechanisms involved in host-pathogen interaction during different stages of infection with Mycobacterium tuberculosis.

From 2010 to 2016, he underwent specialization in Pulmunology at Hospital São João, Porto. During his specialty training, he was also admitted to the PhD programme in Medicine at University of Minho, Portugal, having concluded and defended his PhD thesis in 2017.

He is an active member of European Respiratory Society (ERS) and Portuguese Pneumology Society (SPP).

In 2018, Helder Novais Bastos joined the Faculty of Medicine of University of Porto (FMUP) as invited Assistant Professor, and the i3S at Immune Regulation research group. He is currently a Pulmonologist at Hospital São João, where he works at interventional pulmonology and endoscopy sector, as well at the interstitial lung disease group and the thoracic oncology unit.