Where Ideas grow
About
Research Team

The Addiction Biology group, headed by aims to develop mechanistic insight into drug-abuse related changes in brain circuitries.
Addiction is marked by long-lasting behavioural changes that persist regardless of prolonged abstinence. Increasing evidence suggests that morphological changes in neurons that comprise the brain’s reward circuitry contribute to these long-lasting behavioral abnormalities. Presently, our main research line is focused on understanding how exposure to psychostimulant drugs acts on the molecular mechanisms regulating neuronal morphology and how this relates to drug-induced addictive behaviour. The morphology of glial and endothelial cells is also affected by exposure to these compounds, increasing the relevance of understanding the molecular mechanisms underlying such changes. We expect to be able to pharmacologically modulate these pathways and contribute to new therapies in the field of addiction.
To look at the neuronal/glial cytoskeleton in the context of drug abuse, is novel and challenging and takes advantage from the considerable expertise, on cell biology, cell signalling and cytoskeleton biology available at the IBMC. Furthermore, our group has also a strong background in behavioural testing in animal models, which is essential in this field of study and complements the methodologies mentioned above.
Aware of our responsibility towards the community and society, we aim also to contribute significantly to reduce drug abuse. We run the “Põe-te a milhas das pastilhas“ program, a campaign based on education through scientific knowledge that targets the adolescent population.

We have proposed a new mechanism for MDMA (ecstasy) neuronal toxicity mediated by exacerbated activity of monoamine-oxidase B (MAO-B) (J Neurosci 2007) and also by blockage of MAO-A (Addiction Biology 2009, ranked #1 in the field of Substance Abuse). Later on, we also showed that acetyl-L-carnitine (ALC) could confer effective neuroprotection against MDMA toxicity at the mitochondrial level. This work received a NIDA (National Institute for Drug Abuse- NIH, US) Travel Award. Still targeting the effects of MDMA on the adolescent brain, and in collaboration with a team from the University of Valencia, we have also demonstrated that alcohol pre-use would potentiate drug-induced reinstatement (Addiction Biology 2011).
The success of our community-directed actions on drug-abuse prevention resulted in a growing demand for our collaboration, from high-schools and other types of Institutions, such as detention centres, where drug abuse is becoming an increasing problem. Our web-based resources are also very popular and enjoy a high and steady increase in the number of visitors (see Põe-te a milhas das pastilhas and e-drogas, financed by Fundação Calouste Gulbenkian). These on-going actions reached by now over 30.000 students nationwide. 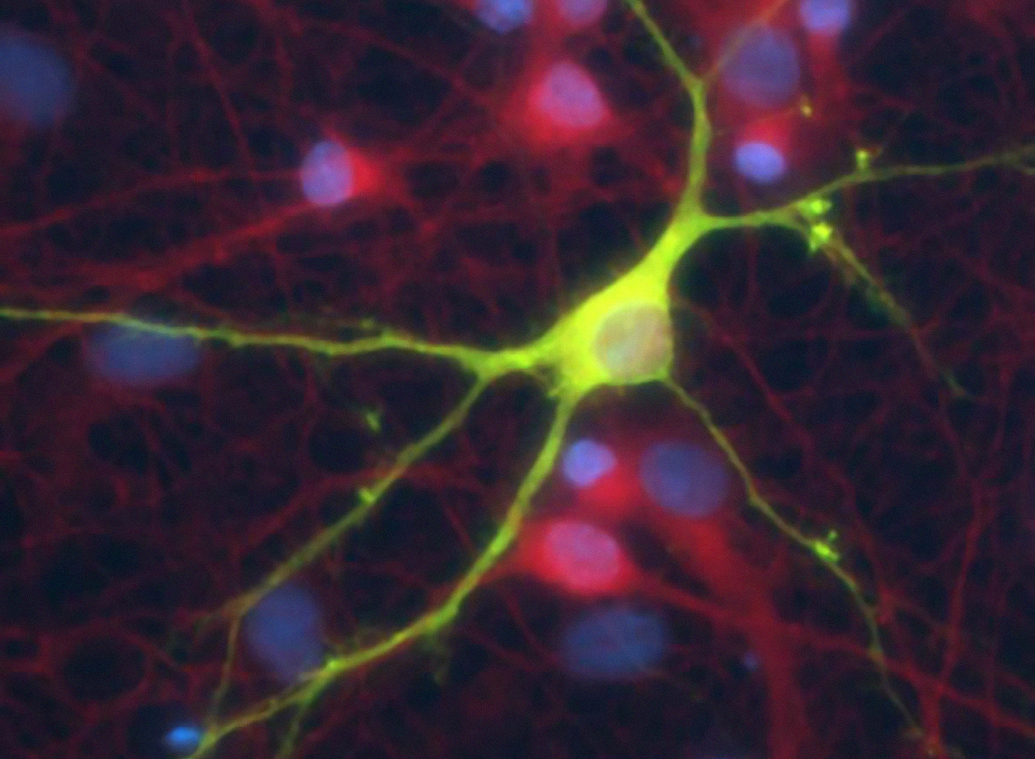 Co-cultured ventral mesencephalic and striatal primary neurons were isolated from E18 rat embryos. These co-cultures are used to mimic in vitro the dopaminergic input into the striatal region, which is critical to the study of psychostimulant drugs. Neurons were stained for glutamate decarboxilase (